Moab Utah.  Aah, what can you say.  A forsaken patch of barren rock and desert where vegetation is scraggly, and only the scorpions seem to thrive.  Where winters are harsh and summers bake  . . .  a piece of heaven  . . .  a mountain bike mecca.

Certainly an awesome test ground.  2016.  Another year, more broken bikes, damaged bodies, bigger smiles, and a HUGE Thanks to the trail builders giving ever more to enjoy.  Thank you, MOAB !!

The big news this year is what we didn’t see — especially as a contrast to current advertising.  This post is a focus on Reality versus Hype — because what you see in the news isn’t completely translating to cycling reality.  You can’t argue that Media and Industry news doesn’t affect customers and sales, it does, but based on our observations, the industry may want to take notice:  Not all cyclists are following. 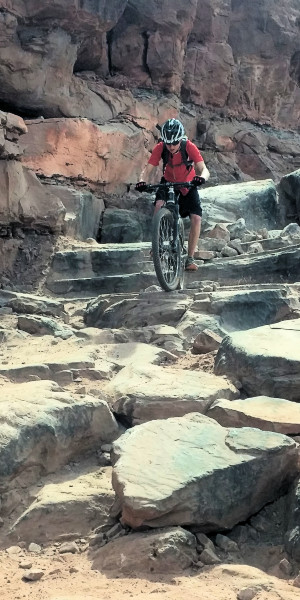 So there you have it.  Our top 10 observations about drivetrain configurations from Moab, spring 2016.  Overall the weather was awesome — a little windy, a little cool, but awesome.  The Jeeps were again an enjoyable side show — so cool to watch.

I guess the take-away is this:  These observations strongly support the assertion that failure to make good front shifting (by others), and the resulting product push via vast marketing has swayed the industry.  Yet, those who resist the propaganda, realize the trend is not a complete solution.  We believe 1x is awesome — so are 2x, 3x, single speed, geared hubs, CVT’s, belt drives, etc..  Each for a different rider.  There is not a One-Size-Fits-All as some have implied. 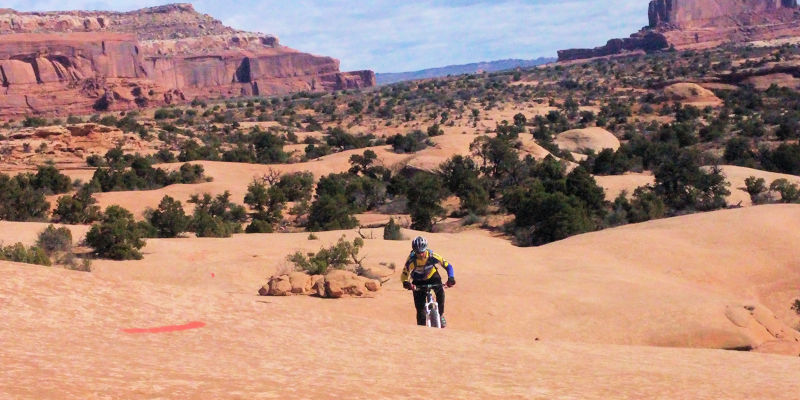 In Moab I felt the antithesis of current advertising, which cements the opinion:  “Maybe the simpler things aren’t always better? — I can’t imagine giving up my smart phone for a land line again.”

I hope you have an open mind.
I hope you ride what’s best for you in spite of pressure to the contrary.
I hope you never belittle others for choosing something different.

A last note — these observations are an informal take in a few wonderful days.  It’s not scientific, and you’ll probably see it quite different at your local trails (we do), so don’t make this as more than it is.  The meaning comes simply because people who travel to ride are, we believe, a little more into it, perhaps a little more self aware, than the average.  It’s OK to ride what works for you, even if it’s not trendy.