Immersion is a great way to learn.  Want to learn a language?  Go where the language is native, you’ll learn so much more.  That was my approach with single front chainrings.

1X drivetrains have, of course, been around for a long time.  5-speeds (1×5) were the envy of kids in my neighborhood growing up.  As we look at them again, there is a certain simplicity in bikes without the added complexity of a front derailleur, cable and shifter.  What’s old is new again — with a twist — of course.  Fueled in part by XX1, single front ring bikes are appearing everywhere, and manufacturers are jumping through hoops to get into the game.

Is it a game?  We’ll look at that question in minute, but first, we need to try it.  Because of the new popularity, a year and a half ago I decided to give it a try, and dove in — mountain and ‘cross.

Plenty Of Reasons For Love

The virtues of 1-by give a lot to Love.  * There is an elegance and a decided sense of simplicity.  * All the shifting is done with one hand, * and it’s sequential; * the system is lighter (some), and * there is less thought to riding.  * Fewer parts gives easier access, * less to adjust and maintain.  And * (as a functional side note) cleaning the bike is easier.

* New rear derailleurs and larger cassettes have solved many of the ratio issues — and made the single more appealing.  Oh, and * I love the greater ground clearance via the smaller front chainring, too.

Is It Love?  Or Heat Of The Moment?

The week before our Moab trip, WickWerks launched production of the Z-Rings, a new 1X system with some nice advantages.  After riding the Z’s and competitive rings for months, I turned my attention back to geared front drivetrains.  What a shock !!  …  I’ve been riding the mountain and ‘cross bikes for months in a 1X configuration, but now, back on multiple front rings, I re-found my love of the bike.  That’s very odd, because I didn’t know I lost it.

Wow, that really got me thinking.  The WHY for that statement is a very good question.

Even with all the virtues of the 1X, and the enjoyment, I’ve never been the guy that thinks one approach is the ONLY way.  In my mind there have always been good reasons for all the variations — 1X, 2X, 3X, geared hubs, single speed, etc..  I guess that’s why I was so surprised about my reaction to jumping back into multiple front sprockets.

It doesn’t take away from the beauty of 1X.  (See the Love above.)  And, I can’t quite put my finger on the “fun” factor of back in gears.  But it’s there!  Like getting on a motorcycle after riding a scooter — just feels like that’s how it’s supposed to be.  Granted, I have the advantage of great shifting WickWerks chainrings, so it’s not like going back to “smash and drag” front shifting — which I’ll never miss.  Yet, for whatever reason, I’ve fallen in love again.  Maybe the simpler things aren’t always better? — I can’t imagine giving up my smart phone for a land line again . . .

Learning From The Surprise

Deeper consideration of this little surprise brings some interesting revelations.  I mentioned (above) the things I love about singles — so here is the other side: 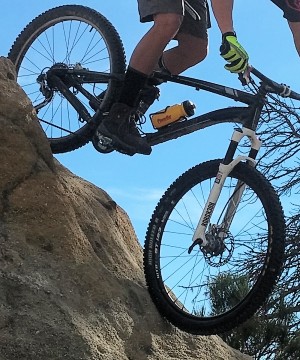 Maybe.  So, who’s winning?  and who’s loosing?  Now before getting fired up, let’s look at some facts:

– Second,  the big move to 1X was stimulated by massive (and convincing) advertising, not by a new way of thinking.  Advertising costs lots of money, and it was NOT done for you — rather, to pull money from your pocket.

– Third,  There has been a lot of inside influence on bicycle manufacturers to make bikes for 1X.  It’s been successful in part because we, as the community of cyclists, have responded to advertising pressure, but also because of incentives and promises for higher profits.  (Fewer components, but “new” features to raise prices.)  It’s not rocket science.

– Fourth,  this change in drivetrain layout accelerates wear of expensive components — meaning you will buy more replacements — increasing yet more the flow of money out of your pocket.

To be sure, it’s not a conspiracy, it’s shrewd advertising and a great play on the market.  Like the King with invisible cloths, in my view, it feels like they couldn’t figure out how to make front shifting right, so they chose to convince the market it wasn’t needed — AND suck more money from our pockets.  Making the new products available is great, but riding the wave to the point it takes advantage of the cyclists they claim to serve . . . well, you decide.

Is there a net benefit for the end user?  Or is it a game for big manufacturers?  The big winners may be the advertisers.

Though I love the 1X for so many reasons, and it was a great experience to immerse into the 1X paradigm, I’ve learned that all the analysis on paper misses, somehow, the “real life” situations and a fundamental “feel” for the ride.  I’m still not sure how to quantify it — which is a funny place for an engineer — but that’s the reality.

I love the 1X!  But, not all the time.  There are so many virtues, and some significant limitations.  Maybe we, as an industry, are ignoring that for the moment?

The most interesting take-away from the experiment is — regardless of industry trends — there is big value in variety — 1X, 2X, 3X, internal gears, single speed, etc..  To think otherwise . . . Well, I hope I don’t get caught in the narrow view of 1.

To the cyclist, I say  Shift Your Expectations.   There’s nothing wrong choosing different if it’s better for you.

By Eldon Goates – WickWërks Engineering Manager
– I ride because I love it.