What is cross chaining?

Cross chaining is the condition where the chain is running across the drivetrain centerline — for example:  From the BIG Front chain ring to Biggest Rear cassette cogs, or from the SMALL Front chain ring to the Smallest Rear cassette cogs.The diagram below shows the 2 different cross chaining conditions.  Show in Top view, looking down on the chain, chainrings, and cassette.  (It is shown as a triple, but is applicable for a double just as well.)

So, Will the drive train do this?   Yes.   Is it a good idea?  That depends on how you feel about the potential consequences.  For a lot of reasons listed below, these may not be the best conditions to run in.  Read on ….

The industry used to say DON’T cross chain, but that has changed.  Especially with the newer 2×10 mountain drivetrains, cross chaining is more and more accepted, perhaps even encouraged, but acceptance does not change the technical issues associated with it. 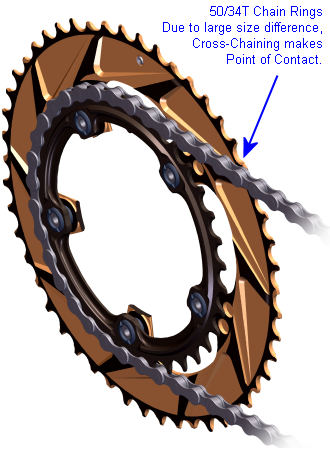 Why not Cross Chain?

he answer is really one of choice and preference. The drive train will do it, but there are some consequences.

Here are some things to think about:

In the end, I’ve only heard two good reasons TO cross chain …

It seems a poor trade for the sake of laziness, but market research says the underlying reason for both of the above is the same.  In general, people don’t trust the front shifting, so they don’t like to do it.  Welcome to WickWerks.  Making a better front shift is what we’re all about — but this is not a sales pitch.  Just keep that in the back of your mind.

An Engineer’s Point of View

In everything that moves, there are inefficiencies.  Friction, wind drag, weight, and stiffness are a few that come to mind about bicycles. Some of those we have control over, some not so much.  Dirt, for instance, gets in everything when riding a mountain bike on a dusty or muddy trail.  That’s part of it, but it degrades the system — requiring more of my limited energy to pedal the bike.  It’s just a little bit if you keep the bike well maintained, but if you allow it to accumulate, it can become quite inefficient.

Chain lines are something we can control in large measure.  When we choose a gear, we are choosing a chain line, and the more out of straight that chain line is, the more internal stress and friction are present.  That equates to less efficiency.  Like the dirt, a little is not a big deal, but if it accumulates, it will show it’s ugly side by wearing out parts faster and (worse case) failing prematurely.

It’s not that the parts can’t do it.  It’s that they last longer, make less noise, remain more efficient, and perform better when you don’t cross chain.

My recommendation is to use good rings that shift easy, then teach yourself to shift (front derailleur) more often and avoid the unnecessary inefficiencies.

So now you understand the bias of an engineer — that is, cross chaining has some negative consequences — but it can be done, and sometimes it’s the easier route.

There is, however, one other aspect to cross chaining that is pretty convincing.  When using a wide ratio chainring set like the road compact 50/34T, there can be interference between the chain and the larger chain ring when cross chaining from small ring to small cog.  The condition is typical of most 50/34 compact sets, and is highlighted (exaggerated) in the image below.

This condition is not unique to any one brand of chain rings.  It is the nature of the wide diameter difference between the 34T and the 50T chain rings.  So, add to the list above the following 2 items:

WickWerks rings are made to be able to cross chain, but please be aware it is not a best practice — and especially not with the wide ratio rings like the 50/34.

For most bicycles (with front and rear gears), there are a lot of cross-over ratios.  They are not usually exact, but cover the same ranges.  A wide ratio crankset like a 50/34 will have less cross-over than a closer ratio set (like a 46/38).  However, there are still ratios to choose, so it is generally unnecessary to cross chain.  (See the diagrams.)

Two diagrams are shown above.  These show the overall ratios (X-Axis) that are achieved with each of the front chain rings indicated (Y-Axis).  The vertical slashes in the colored area indicate the ascending cassette gears (noted just above the X-Axis.

Visually you can see that anywhere the two horizontal colored bars overlap is a cross-over ratio.  Those ratios surrounded by the “green” cloud are the best choices — basically it’s all but the 2 most extreme cross chaining ratios.

The first diagram shows ratios available for a 50/34 chainring set paired with an 11-25 cassette.  Note that there are 2 pair of ratios that are almost the same from the 50T and the 34T and are in the green.  These are the easy cross-over ratios.

Obviously to get to the easy ratios requires shifting both the front and back derailleurs at the same time.  That’s not hard when you try it a few times, but we’ve found it’s not the natural tendency for most people until they are introduced to the idea.  After trying it a few times, it becomes so easy, and natural — you back off the power for a split second, make both shifts, and back on the power without missing a beat.  Incidentally, the shifts tend to be easier and quicker when there is a dynamic change in the chain — like both derailleurs moving at the same time.

It’s a much better approach than cross chaining, and much better than abusing the drivetrain.  After all, you’re putting out the power — make it go to the ground rather than to wearing out parts.

Currently Reading:
What is cross chaining?