In the bicycle industry we hear about “Anodized” aluminum frequently.  In fact most aluminum parts of any bicycle are either anodized or painted to protect them from the elements and to protect us from the amorphous aluminum oxide layer that naturally occurs when aluminum is exposed to oxygen.  Not all “Anodize” processes are equal, however.  At WickWerks we use a “True Hard” which is not so common.  What’s different?  Here’s a discussion about anodizing (trying to walk the fine line of technical enough without being too technical).

In general, pure Aluminum does not like exposure to Oxygen — like the air.  When exposed to oxygen (or any gas containing oxygen) “pure aluminum self-passivates by forming a surface layer of amorphous aluminum oxide”[1].  You can see this by rubbing the aluminum with your fingers — the black stuff on your hand is the aluminum oxide that naturally “grows” on bare aluminum surfaces.

Example:  Have you had aluminum brake levers?  When new, the anodized levers are clean an beautiful.  As they wear, the “anodize” eventually rubs off, and if you ride with bare hands, you will get a gray or black mark where your fingers have rubbed the worn brake levers.  This black is the aluminum oxide rubbing off onto your fingers. 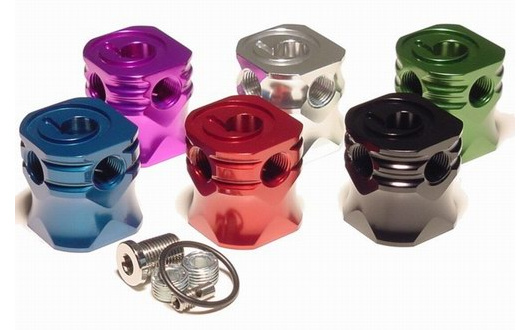 In the bicycle world, the most common anodize for machined parts is Type II or “Color Anodize”.  This produces a smooth and beautiful surface that can be easily dyed and very attractive.  Type I is also used, but more often on cast parts.  Type III or “True Hard” is more common in industrial and military applications because it gives a very hard, but not as pretty appearance — and does not do color well.

“Aluminum anodizing is usually performed in an acid solution which slowly dissolves the aluminum oxide. The acid action is balanced with the oxidation rate to form a coating …”[1].  While dipped in solution (the acid bath), parts are subject to high electrical currents that cause surface oxides to “grow”.  This oxide growth is what we call anodize.  The longer it is allowed to “grow”, the thicker it becomes.  Without going into detail, there are practical limits on how thick it can be.

These coating are graphically described as millions of little hollow worms extending from the surface — effectively creating microscopic fissures or “pores” on the surface.  This anodized surface is much harder than the bare aluminum — which provides the mechanical protection.  Chemical protection (like from water and oxygen) comes when the pores are sealed after anodize is complete.  The nice thing is the millions of pores provide a wonderful place for sealants and dies to anchor. 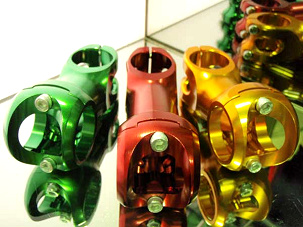 Type II, commonly referred to as “Color Anodize” or “Bright Dip” is common because it is less expensive and can be done in all sorts of colors.  Basically, it is a “clear” anodize process where dye can be added to make it virtually any color.  It provides a smooth, consistent surface and a moderate level of both mechanical and corrosion protection. Type II is ideal for areas that are visually important but don’t have much abrasion.

“Color Anodize” can be made more wear resistant by making it thicker.  Of course, thicker is relative — as typical thickness is on the order of 1/4 of the thickness of a hair.  Just enough to create the barrier and support the color.

Type III anodize is also referred to as “hardcoat” or “True Hard”.  This differs from “Color” anodize in the way it is created (sulfuric acid bath) and it’s thickness.  For “True Hard”, the acid bath is agitated — like a hot tub — sometimes near or below freezing (where it must be agitated or it will freeze).  It also uses much higher electrical current.  The acid accompanied with low temperature and high electrical power produces a much thicker and much harder anodize coating. 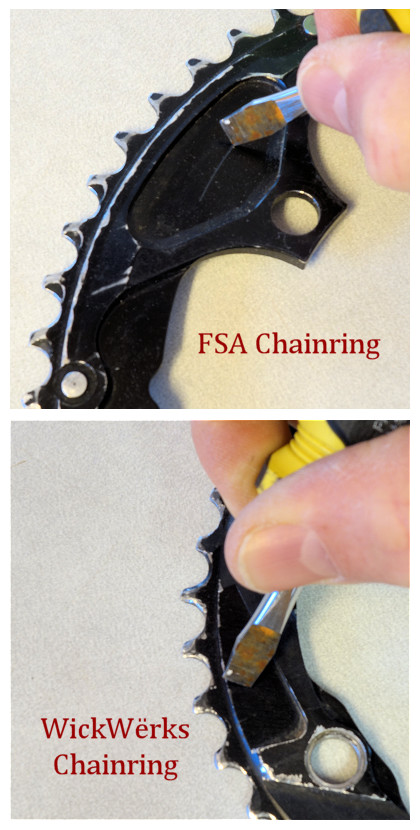 As a reference, Type III anodize is 2 – 4 times thicker than the color anodize.  And the coating provides a much harder surface.

The big draw-backs of Type III anodize are:

WickWerks rings are made of Aluminum 7075.  Anodized at the low temps with high current, they turn out almost black.  We dye them black as well for consistency, but the dye would not do much if they were not already almost black.  Basically, you don’t get to choose color with Type III anodize — the choices are dark bronze or black.

While Type II is all about color and making parts pretty, Type III (“True Hard”) is much more about protection.  To more fully understand this, do the screwdriver test.  (Illustrated in the images on the left.)

Using a part that is color anodized — like one of our competitors rings — select a flat blade screwdriver and scratch the anodize.  Note that it scratches fairly easily.  Do the same test on a WickWerks chainring, and note the pressure required to actually scratch it.  Pressure that will scratch the color anodize won’t hardly leave a mark on the “True Hard” anodize of the WickWerks chainring.

As mentioned above, the last part of the anodizing process is to seal the pores created in the oxidation layer.  This can be done with a variety of chemicals.  With Type III, this is frequently done with nickel acetate or something similar.  At WickWerks, we use a PTFE (Teflon) based sealant that fills the pores with a Teflon material to make your ride more efficient and to further enhance wear resistance.

The toughness of the “True Hard” anodize is a surface condition that greatly enhances wear resistance.  It’s a military grade anodize process intended for really tough conditions.  If you look at the life of a chainring, that’s a pretty tough application.

Remember, this is for just one 2+ hour ride.  Many riders do this nearly every day!  . . . And we haven’t even started the discussion about shifting pressures and scraping! 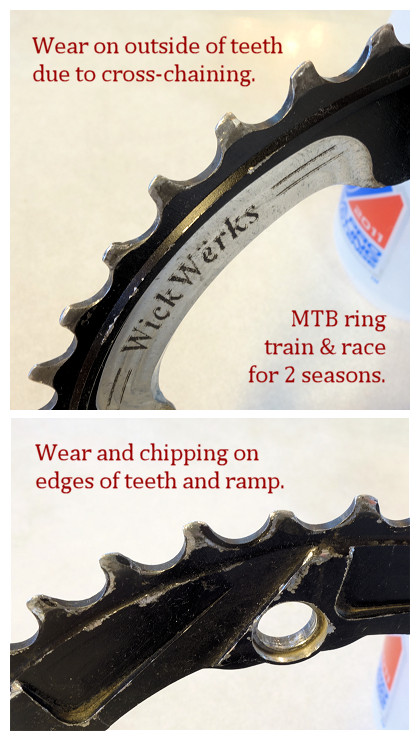 The environment of the lowly chain wheel is one of difficulty, abrasion and abuse.  We get on and pedal constantly, trying to put out as many watts as possible.  All that in the name of training, enjoyment and competition — but, the chainring sees all that abuse and must run without complaint.  It’s a tough life, so we decided to make it a little easier by adding a much tougher surface over the aluminum.

Like most high-end chainrings, WickWerks rings are made from an aircraft grade aluminum alloy designated 7075.  This is one of, if not the highest strength aluminum alloy.  It’s much more expensive than most, but it’s also stronger than most.  The strength is required to handle your high output legs.  At WickWerks, we enhance that material by giving it a really tough covering — Type III anodize.

The Type III (“True Hard”) gives an added measure of wear resistance.  This does not make the rings stronger, it just keeps the wear in check longer so that the bare aluminum is not exposed to the nasty forces and scraping that happen at the surface.

Basically, all chainrings will wear out in that common “shark tooth” configuration we’ve all seen.  WickWerks rings are no different, because the aluminum in our rings is the same as aluminum in other high-end rings and once the anodize is warn away, it’s just bare aluminum versus the steel chain (and rocks and grit and debris).  The difference with WickWerks rings — the hard coat anodize lasts longer on the teeth before the real wear begins.  It takes a lot more to wear through the “True Hard” anodize than the “Bright Dip” or “Color Anodize”.  That’s a functional thing.  It means the chainrings will shift and run like new longer because of the “True Hard” anodizing.

Interesting side note:  Since our introduction in 2008, other manufacturers have also started using “True Hard” anodize.  Campy in particular, is now using it on their latest rings.

Finally, As mentioned, WickWerks uses a Teflon base to “seal” the anodize.  This is a little more expensive, but gives a slicker surface — and as the anodize eventually wears, it exposes more Teflon to provide a margin of extra slipperiness.  The slipperiness not only improves efficiency when pedaling, it also reduces wear by helping the contacting parts slide over the surfaces easier — thereby not wearing as much.

We do not claim WickWerks chainrings last longer — because there are too many factors out of our control.  However, many customers say they last a lot longer.  Longevity is largely a function of maintenance.  Care for them properly, and they will last and serve you well.  See Recommendations below.

These measures of Hardcoat with Teflon seal are not a silver bullet — they definitely make a difference, but can’t protect everything.  As can be seen in the images here, the edges of the ring wear first because they are most exposed.  Also, abusive shifting can chip the material and leave gouges that are not so pretty.  That being said, if you respect your drivetrain, you can ask a lot from it and the WickWerks rings will certainly perform for a long time if you do just a few things:

1.  Keep the bicycle chain clean and lubricated.  (Of course it will get dirty, but clean it regularly and lube it frequently.)
2.  Change the chain when it becomes warn (when it “stretches”).
3.  If you damage a chainring, take it off, fix it up, and put it back better.

At WickWerks, our object is to provide the best front drivetrain components in the industry.  It’s the little details like the choice of Anodize — even the type of sealant used with the anodize — that assist us in giving you the edge.