WickWerks is an official sponsor of USA Cyclocross Nationals 2014.  We’re there with Banners Flying and Racers Winning!  An awesome event with tons of great action.  Here’s the short story of how it all went down.

On Tuesday, Valmont Park was swarmed with volunteers and staff setting up the course and all the venue.  The place was alive with activity and anticipation.  WickWerks was there too, putting up banners and assisting where needed.  A quick shot below of the Barriers, the Banners, and someone testing out the course. 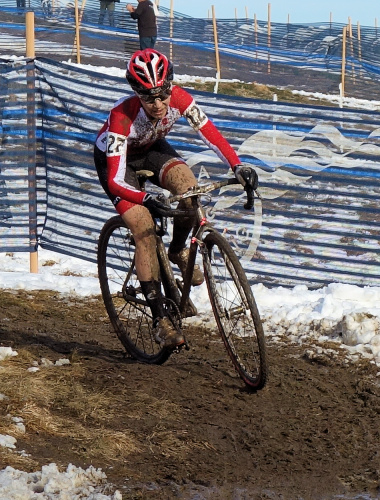 A big congratulations to Mo Bruno Roy who claimed the Women’s Single Speed National Champion Title – riding, of all things, a WickWerks ring on her single speed.?.  Congrats Mo!

The photo shows Mo aggressively navigating a tight, muddy corner on her way to victory.

Thursday saw several Masters races and many WickWerks chainrings on the course.  Though no sponsored riders raced, WickWerks swooshes flashing through the mud and snow all around the course on this second day of Cyclocross Nationals 2014.

Friday’s big story was the WIND adding a measure of difficulty for Racers, Spectators, Vendors and Staff.  Yet, through the wind, two WickWerks riders found the podium:

Congratulations to both of these riders! 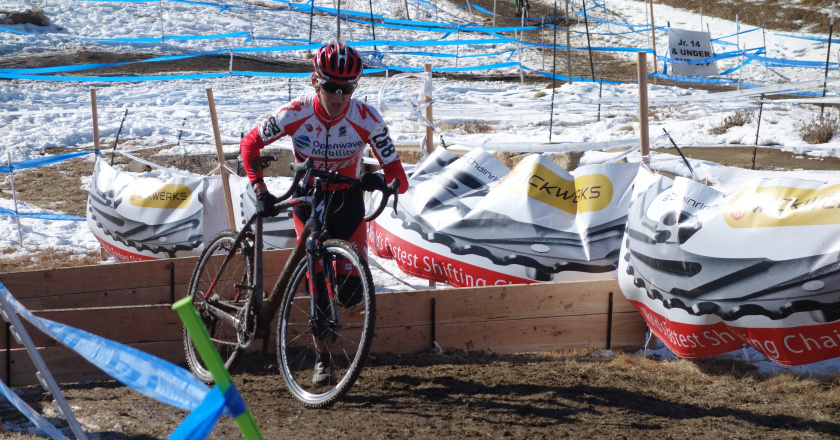 Gage Hecht Running the Barriers through the wind blown and billowing WickWerks banners.

Saturday at Cyclocross Nationals 2014 was again hammered by the wind.  More banner fatalities.  Flags flying full tilt … WickWerks banners in a heap after being blown down by the wind … but the races go on!  (See the featured image at the top of the page.)  The Wind messed up the venue, but did not hamper the races.  Again, two WickWerks sponsored riders stood on the podium!

– First, Kaitlin Antonneau took charge of the Collegiate Women – Division 1, Winning by more than a minute!  Big Congratulations to Kaitlin! 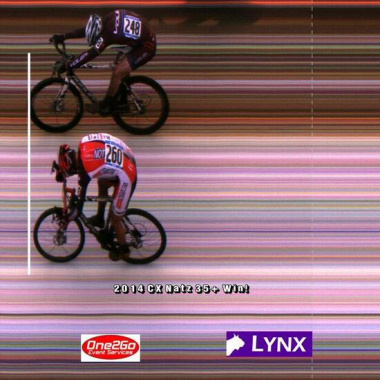 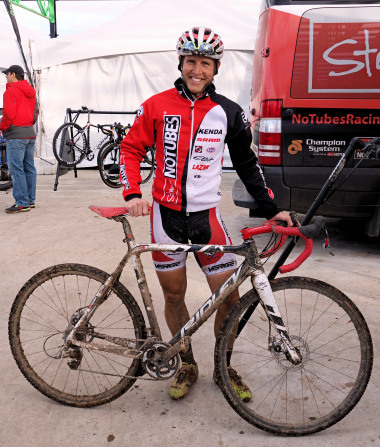 From inside looking out, you’d say “What a beautiful day.”  And indeed it was.  The sun was shining most of the day making it reasonably warm for January.  The wind came and went — sometimes it blew quite hard with a bitter bite, and other times it died down and temperatures seemed very pleasant.  What a great day to be outside enjoying a cyclocross race.

The crowds were awesome.  Lots of people, lots of great (really great) racing action.  What more could you ask? 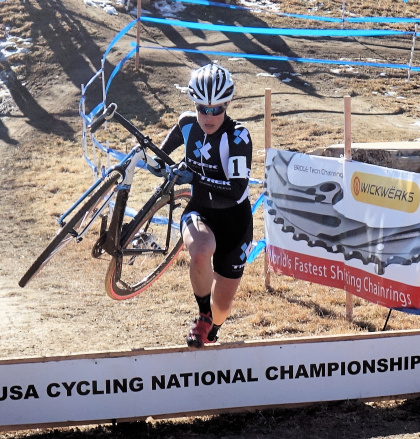 WickWerks chainrings were well represented in the Pro Men and Pro Women fields.  Of course a few are sponsored riders, but many others were rocking the rings for the performance benefit.  Great to see it.  (I took lots of photos, so perhaps I’ll do a post on that here soon.)

From the Elite Women’s Race:

Stellar performance from Katie Compton.  We’ve come to expect amazing rides so if you came to see a demonstration of smooth and fast, you were not disappointed.  Katie pushed the envelope through the whole race, making it look so easy, finally winning by almost a minute.  That completes a full decade — 10 Times USA Cyclocross National Champion.  Truly an amazing feat!  Truly an amazing athlete. 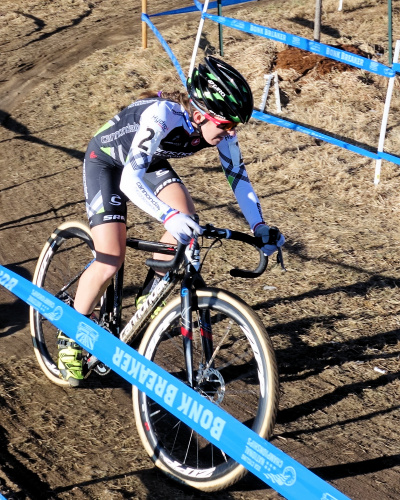 Coming off the Collegiate win the day before, Kaitlin Antonneau got right back in it and finished 7th in the Elite Women’s field — securing her second national title — 1st Place in the Women’s U23.  Big Congratulations to Kaitlin!

Nicole Duke of Boulder, CO, pulled in 8th Place in the Elite Women’s race.  Surging early she made the race exciting right from the beginning.  Great Race, Nicole! 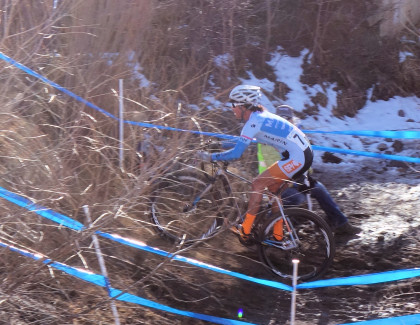 With conditions radically different than day 1 when she pulled off the single speed win, Mo Bruno Roy placed 10th in the Elite Women’s race.  Fun to watch Mo Race because anytime someone yells here name she smiles.

Hat’s off to Judy Freeman who couldn’t stay away — after being sick for weeks and still not completely well, Judy started way back in the field, yet still grabbed 18th Place of 111 starters in the Elite Women’s race.  Fantastic Ride!

Also in her second big race of the week, Laurel Rathbun came in 33rd overall, making her 5th Place in the Women’s Cat 2.  Great Job Laurel. 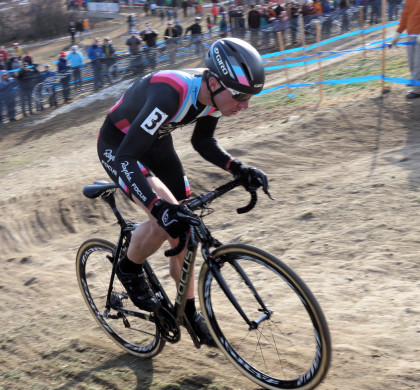 The last race of the USA Cyclocross Nationals 2014, the Elite Men’s Race:

After the amazing and difficult ride just the day before, Jake Wells again had a good ride in the Men’s Elite race — coming in 13th Place in a field of over 100.

Finally, though not a WickWerks sponsored rider, we’ll give a shout out to Jeremy Powers who blazed an amazing race and showed us all why he IS the men’s USA Cyclocross National Champion!  Jeremy has twice won the WickWerks Wicked Fast Lap Award at CrossVegas.  Today, he showed us all that he is the fastest American in ‘cross.

Congratulations to all the WickWerks riders, and all those riding WickWerks – World’s Fastest Shifting Chainrings.

Congratulations to all who participated, and especially all who took titles in the USA Cyclocross Nationals 2014.

Racing at the Carnival