Purchase Here By Selecting Your Option

– New Rings are IN!  All backorders have been shipped.

WickWerks makes chainrings for BOTH SRAM RED Crank styles (and BOTH SRAM Force Crank styles).  Examine the images below to know which crank you have, then follow directions below each image so you can get the right rings.

The LEFT image is a typical SRAM RED Crank before 2012.  This configuration is typical of most road and ‘cross cranks — available in 110mm BCD as well as 130mm BCD.

Look at your crank.  If you see all 5 bolts as shown above on the LEFT, you will need our standard CX 44/34 chainrings (here) for correct fit.

Look at your crank.  If you see 4 bolts as in the image on the RIGHT (and if the 5th bolt is attached into the back of the crank arm), this is the right place.  Select the “SRAM Red” Crank Style (near top of page), then “Add to Cart” to place your order.

Note:  Crank graphics vary from year to year.  The cranks shown above and below are for reference of the bolt patterns.  The important things are First, the hidden bolt;  and Second the BCD (Bolt Circle Diameter).

(BCD or Bolt Circle Diameter is the circular spacing of the 5 chainring bolts.  Both images above show 110mm BCD (or “Road Compact”) cranks.  130mm BCD is also a common size.  Measuring the bolt circle of a 5 bolt crank can be a bit difficult, but it should also be indicated on the crank or on the existing chainrings somewhere.  Check the size before ordering your new chainrings.)

Similar to above, the LEFT image is a typical SRAM Force Crank before 2013.  If your crank has all 5 bolts visible as shown on the LEFT, you will need our standard CX 44/34 chainrings (here) for correct fit.

Like the Red above, the RIGHT image is the newer Force 22.  If your crank has a bolt configuration like of the image on the RIGHT (with the 5th bolt behind the crank arm), this is the right place.  Select the “SRAM Force 22” Crank Style (near top of page), then “Add to Cart” to place your order.

Note:  There is an easy method for mounting WickWerks chainrings on the SRAM Force 22 cranks.  Please see these special Force 22 mounting instructions.

The 2012+ SRAM RED Exogram crankset (aka Red 22) is excellent for Cyclocross.  SRAM says the new RED is both lighter and stiffer than the previous generation (not to mention they’re cool with the hidden bolt), which makes it great for ‘cross. Now enter the WickWerks, ‘cross specific chainrings — these rings are exactly what the cranks are begging for, and it’s a dynamite combination.

Check out the chainring images above.  Look especially at the back view to see the radical chain ramps.  (We call it BRIDGE Technology.)  This technology is well proven on CX courses all over the world.  They’ve adorned bikes and racers to the podium in races from local scrimmages to a World Cup Championship, so we’re certain they’ll perform for you.

WickWerks chainrings are a favorite in cyclocross circles because of their capability.  Adding them to your Red 22 or Force 22 is a wonderful upgrade.  Check out some Riders that use them.  They’re proven by some of the best. 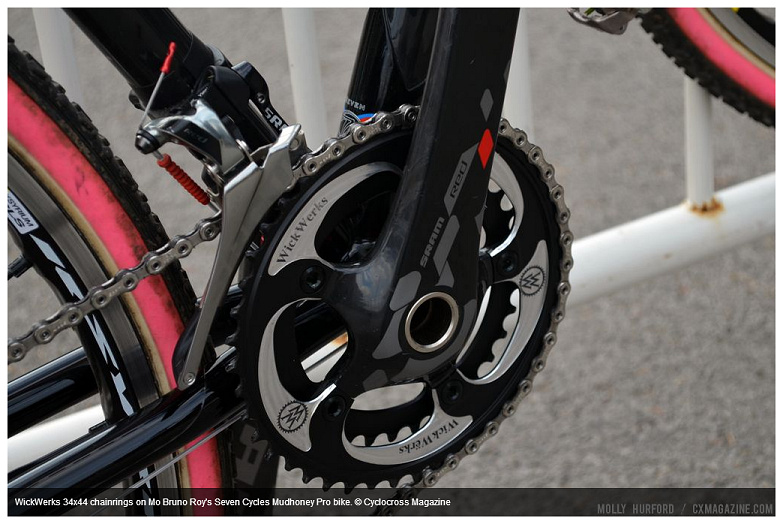